Happy Monday once again! We hope you had a wonderful weekend and are ready to take on the week with a bang, and to help you do so, let’s start the day off with some Coffee Talk.

What’s been happening in the tech world as of late? It seems that Google’s mobile search has surpassed that of desktop. Simultaneously, Twitter, Facebook, Pinterest, and Instagram have been extremely busy with each of the social media apps releasing updates over the last few weeks.

It seems the company has overtaken traditional desktop searches due to their ever-expanding list of services.

Google’s Android service alone is said to have over 1.4 billion users and the recently released Google Photos app has over 100 million users who have uploaded over 50 billion photos since its inception.

It seems the battle to claim the rights for top search engine has spilled over to the world of social media as well– In the ongoing war between Facebook, Twitter, and Instagram, the oldest of the three social networks has released a universal search feature called, ‘Top Posts.’

Independent tech magazine Re/code cites that it is, “a push to surface more internal, Facebook-generated content when users search for news topics.” Twitter is the current reigning champ in the social media app world for breaking news as its platform is designed around real-time communication.

As always, Facebook is making a valiant effort to integrate their social platform with features so as to become as synonymous as an email account in our daily lives. However, this one in particular is what we’d consider to be a game changer.

Leading the pack, social media app Twitter has continued to lead the pack in terms of search features.

Hailed by the company as the “Best of” Twitter, Moments are hand-picked newsworthy articles, tweets, etc. curated by Twitter employees. Offered up in neat, easy-to-use packaging, Moments modifies the staple Trending feature of Twitter so that users no longer have to comb through entire channels for interesting finds.

While it’s at a nascent stage now, we look forward to seeing what the future holds for Twitter and producing real-time events. 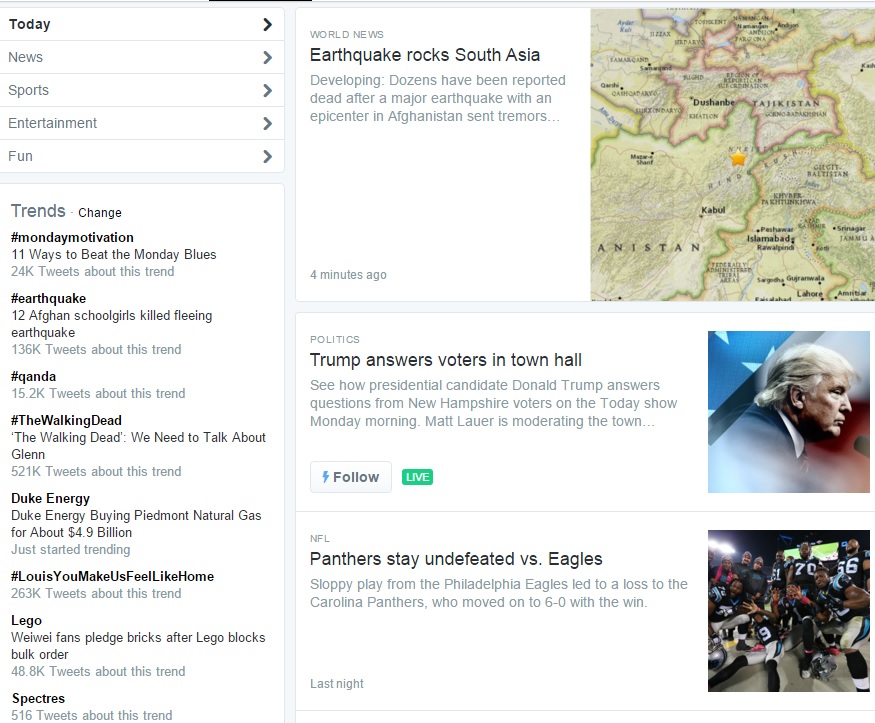 Have you been bitten by the travel bug? Are you subject to a never-ending wanderlust? Or do you simply want to explore local businesses more easily? If any of these questions pertain to you, it seems Pinterest has your solution with is new feature, ‘Place’ Pins.

These pins provide a unique combination of travel with an online map accessible through Android or iOS devices which can be shared with friends and family. The pins are helpful in finding new places, getting directions, and more. For instance, you can now find details such as the address and phone number of roadside eateries or diners before you head out on your next road trip.

It’s a fun option for Pinterest users and a practical one for local business owners who are looking to promote their products or services.

Last but not least, Instagram has launched a new feature for their photo (and video) curating app called, Boomerang.

Following the release of Hyperlapse and Layout this new feature allows users to record videos or sequence together a photo stream into a video. What’s so unique about that?

Boomerang takes a burst of photos and stitches them together into a high-quality mini video that plays forward and backward. Shoot in portrait or landscape. Share it on Instagram. Boomerang automatically saves it to your camera roll.

In what is a hybrid Gif format, Instagram is hoping to offer of some stiff competition to Twitter’s Vine and Tumblr.

That’s all for today, but if you happen to download the Boomerang app, send us a mention on Instagram @TalenAlexander with #BreakThroughTheNoise. Have a great week!