Skip to content
Previous Next
Consumer Behavior Stumps Top Research Institutes, So What Can Your Marketing Department Do?

Consumer Behavior Stumps Top Research Institutes, So What Can Your Marketing Department Do?

15 years ago the record industry was unaware of the shifting tide that would forever change how people purchased and listened to music. The eventual rise of the mp3 and p2p sharing services like Napster, Kazaa, and Morpheus took the industry by storm and resulted in a number of lawsuits being dealt not only to the software developers, but their users.

Even today after the blitzkrieg suffered by record labels, industry executives and are artists themselves are looking for ways to ensure proper compensation while reaching their audience. File streaming services like Spotify and Tidal were born from the technological advancement/disruption that the music industry has still not quite recovered from.

Nonetheless, brands like Apple embraced the change in consumer behavior and assisted the push in allowing consumers to both create and satisfy their demand with their iTunes software program available on all their hard goods—computers, laptops, and mp3 players.

However, this change in consumer behavior affected more than just the music industry alone. Television, motion pictures, news outlets, and eventually all traditional consumer based businesses were under siege via the internet. 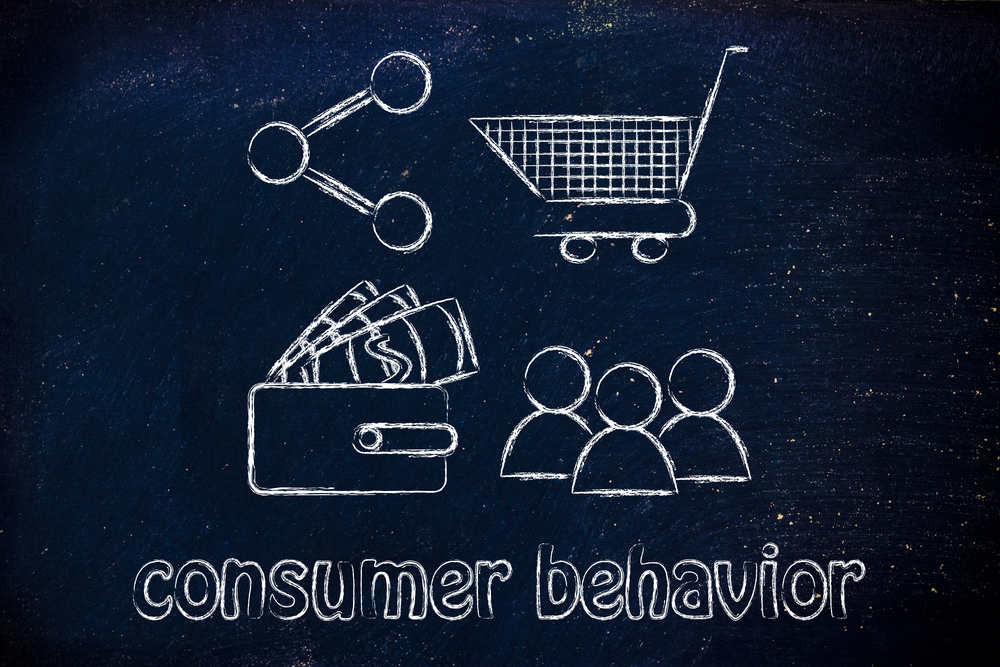 With the rise of smartphone technology, mobile application development, and social media marketers were forced to now seek out their fragmented audience. Where it was once simple enough to run an ad during a television commercial, rely on direct mail campaigns or paper catalogues, target market research had to be done to find out where there audience had scattered.

You’ve already developed a brand that holds true to your beliefs, so now how do you make sure your content reaches its intended target? This will require a bit of research.

You already understand who your core audience is, as it has been an important step in your brand development process. You’ve spent the hours developing messaging that will resonate with your audience and is reflective of your culture & services as a company.

Your initial search will require that you primarily understand where your target audience has been “hiding out.” Are they on Facebook, Pinterest, or Instagram? Do they continue to use legacy media such as print, radio, and television?

The Pew Research Institute has managed to lock down general studies pertaining to internet usage by demographic. 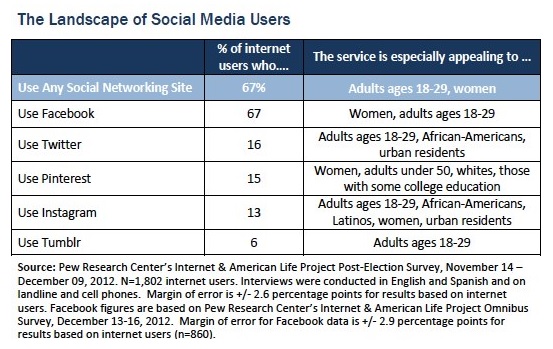 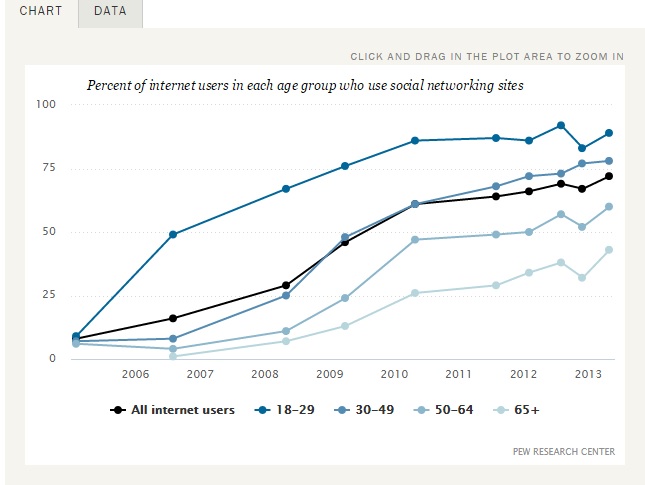 *More in-depth information for the 2012-2013 social media platform usage is available at PewResearch.org under Demographics of Social Networking Platforms

Although the studies provide great insight they are not tailored to your specific industry and account primarily for internet usage alone, not users accessing content via mobile device.

To remedy the gap in information a great place to build upon this information is within your current customer base. Questionnaires or surveys are an age old method that seek information straight from the source.

A company that is a great example of following the trend in consumer behavior is the deodorant brand, Old Spice. Having revamped their marketing campaign for their target market, millennial males, the brand rolled out a series of commercials featuring actor Isaiah Mustafa as “Old Spice Man” in 2010. In 2012 they re-introduced a new character in 2012 featuring comedian/actor, Terry Crews.

Running as televised ads, the commercials were successful, but an even greater benchmark of their numbers were recorded when the ads were uploaded to their YouTube account. The introduction of “Old Spice Man” currently has over fifty-one million views.

YouTube is not a new medium amongst the Old Spice demographic and is a website utilized by hundreds of millions of people worldwide and across all demographics. Where the true genius of their marketing strategy comes into play is Old Spice’s power play to Imgur. 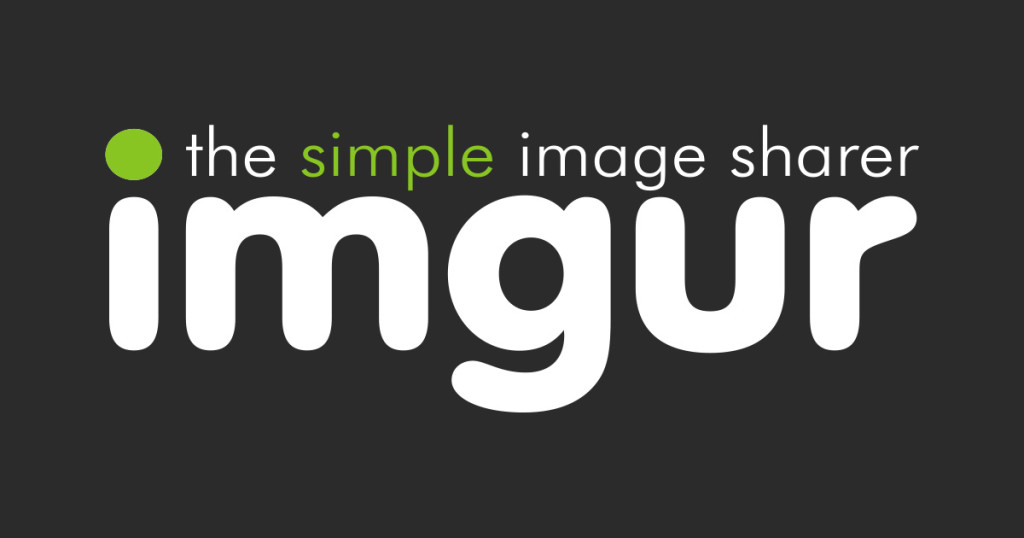 Imgur is an online image sharing community where users can upvote popular content (memes, Gifs, photo albums) to the front page to share with others. The Imgur demographic: Over one hundred fifty million users, of which, are largely skewed toward millennial males.

The Imgur site like many other social platforms recently allowed for promotional posts by brands. Facebook has long since allowed advertisers to promote through its social network and those of you partial to Instagram may have seen an actual ad in your image feed.

In marketing towards….here. Just have a look for yourself. 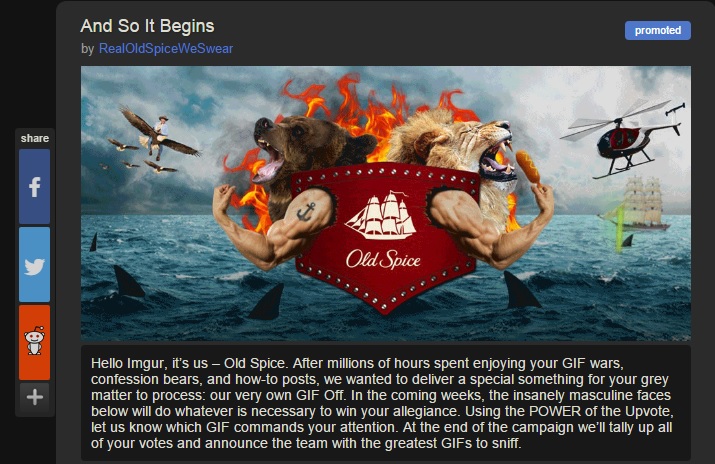 What was the reaction from Old Spice’s target demographic being advertised to with purposeful intent within the Imgur community? Resoundingly positive. 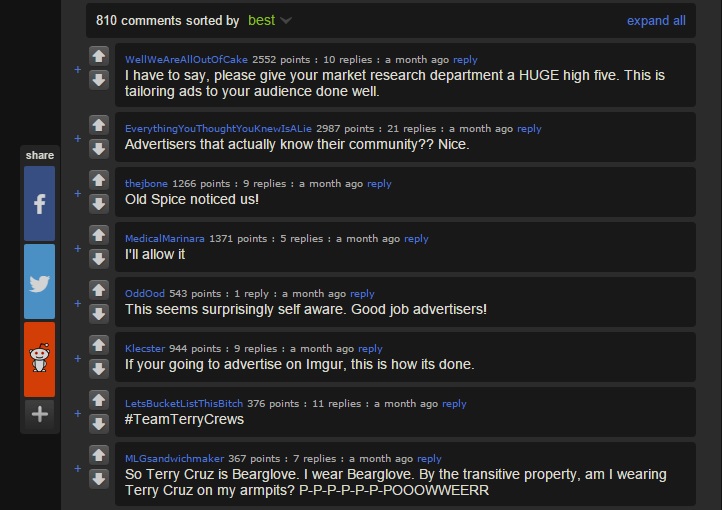 Traditionally marketers seek to be subversive in gaining favor with their target demographic, but the level of interconnectivity available today has made life more transparent than ever.

The world of politics, entertainment, sports, are becoming ever more transparent. Whether it’s the Patriots “Deflategate” scandal, Ashley Madison information leaks, or police behaving deplorably, information of events of this nature are released daily. It’s becoming progressively more difficult to pull the wool over the eyes of millenials and/or their progenitors as the veneer between truth and reality is stretched more thinly.

Old Spice decided to roll the dice and include their audience in on the fun. How? By researching their market, joining their community, and adhering to their rules. In doing so, they succeeded with flying colors and may have changed the way they’re viewed as a brand: As one of their own.

There is no surefire way to account for the shift in consumer behavior and while Old Spice may have had no intention of changing the way the industry operates, they’ve definitely set a new precedence.

Whether you’re Team Bearglove, Timber, or a  team of your own design, remember to #BreakThroughTheNoise