Skip to content
Previous Next
The Culture of Personality in Politics

The Culture of Personality in Politics

Today marks the start of the Republican National Convention in Cleveland, Ohio. The event features a line up of speakers ranging from military personal and entertainers to politicians and entrepreneurs. Following suit, the Democratic National Convention will kick off one week later in Philadelphia, PA.

There will be personality in abundance as charismatic leaders take center stage to promote their respective party’s platform, all of this leading to the federal elections. In November, voters will take to the polls in support of Donald Trump (R) or Hillary Clinton(D) out of the over 200+ political parties represented. But with a such an expansive field of political party affiliations, how do voters manage to narrow it down to two?

To elaborate, how have these two candidates managed to outlast their competitors? It was no secret that Senator Clinton has faced a federal indictment. Nor has anyone been oblivious to the fact Trump lacks any political experience while regularly making contradictory statements.

Before we begin though, we understand that donations from Political Action Committees (PAC’s), celebrity endorsements, and party affiliations per state have been huge factors. However, our argument is aimed more at dissecting the character of the candidates.

Going back to our original comments on the less than spotless record of both Trump and Clinton,  we know no one is perfect. However, the measuring stick used to gauge the moral fiber of the POTUS is usually regarded with high-esteem. Or is it?

If we were to judge the presidential candidates based solely on their character, there’s a good chance neither would be in their current positions. However, presidential elections have long been won on personality, and not character.

Before we move forward, let’s take a look at some information regarding Political Polarization. 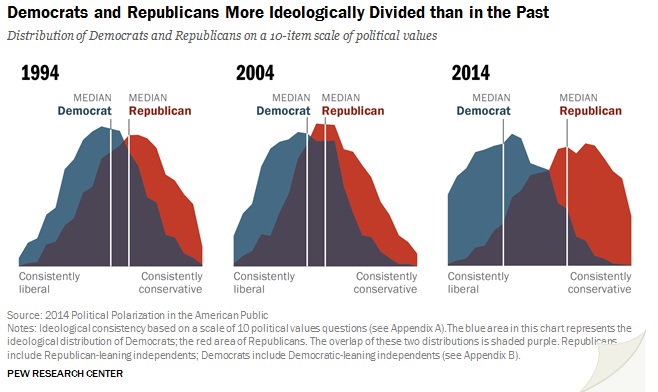 Republicans and Democrats are more divided along ideological lines – and partisan antipathy is deeper and more extensive – than at any point in the last two decades. These trends manifest themselves in myriad ways, both in politics and in everyday life. And a new survey of 10,000 adults nationwide finds that these divisions are greatest among those who are the most engaged and active in the political process. – Pew Research Center

To better understand the sentiments of political polarization, have a look at this next graph. 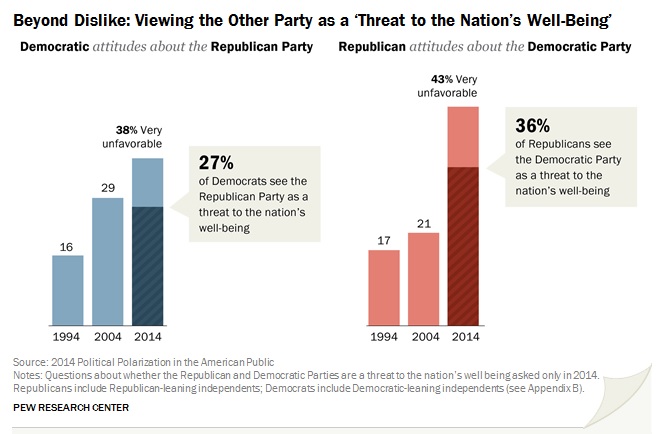 In looking at the distinct division among voter loyalty and the fears harbored among candidates, it’s clear there is very little room for a middle ground.

In looking at all of this data, we can assume that those who lean heavily left or right, exhibit consistent liberal or conservative behaviors. To elaborate, these party members are unwavering in their habits at the poll or with their pockets (donations). So what type of candidate would appeal to polarized audiences? Clearly someone who is charismatic, has an infectious personality, and is staunch supporter of party ideals.

So if we’re voting for candidates based on personality, what kind of traits do we judge them by?

According to political psychology six distinct personality types have been identified in politics. “There are certainly other personality types in any human population, but they lack the psychological traits necessary to produce both interest and success in politics,” David Rosen of Campaigns and Elections. 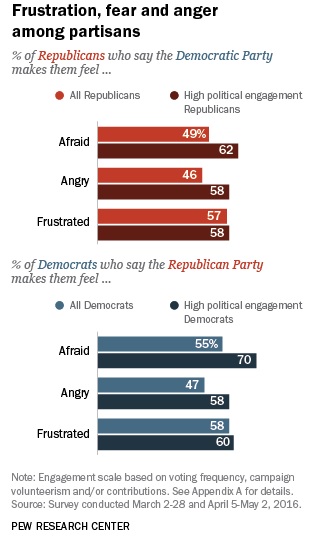 So, what are the six personality types? *Examples via Campaigns and Elections*

“Attention-seeking, grandiosity that verges on exhibitionism, and a tendency to scapegoat when things go wrong. Narcissists are extremely convincing liars, and they are the ultimate users – demanding loyalty from others they seldom give in return.”
Bill Clinton, Ronald Reagan

“Hard-working, conscientious, and ethical personalities are driven by a need for accuracy. Their biographies and professional capabilities usually outshine their personalities.”
Barack Obama, Hillary Clinton

“Master manipulators. Machiavellians focus on the game more than the outcomes. These cool and calculating types are not generally burdened by the ethical qualms that keep others up at night. Winning is everything; the rest is negotiable.”
Rahm Emanuel, Nancy Pelosi

” Sycophantic toward superiors, competitive toward peers, and domineering toward subordinates. They value toughness, believe might makes right, and have contempt for mercy. They also tend to be conservative, sexually prudish, rule-oriented and prejudiced – projecting their own flaws and insecurities onto low-status groups.”
Dick Cheney, John McCain

“Extremely rare in electoral politics because they demand absolute obedience from underlings, believe in their own infallibility, and wield power through a combination of awe, terror, and the gullibility of their supporters.”
Adolf Hitler, Kim Jong-Il

While we saw Senator Clinton in the obsessive-compulsive category, missing from the list is Donald Trump. Any guesses as to where he might land? While we haven’t made any guesses here at TalenAlexander, we were able to uncover an interesting social experiment.

While the video reveals some shocking information about Trump’s fan base, it raises a bigger question as to the messages he sends. To be fair, this experiment could have been performed with a number of different controls and concluded with a similar result. Nonetheless,  in viewing the clip we can still clearly see polarization of parties and blind allegiance to party ideals.

While you may still not be convinced of the power of personality, take this in for a moment. We choose to take in the soap opera that has become American politics. Any and all registered voters can easily cut past all of the theatrics by visiting sites like Ballotpedia.org.

Ballotpedia provides comprehensive election breakdowns. From political candidates and party policies to registered parties by state and candidate platforms. It literally has all of the information in black and white. So with all of the information already present and accessible 24/7, why do we chose to tune in to debates? Because text is boring and doesn’t  fill your living room with energy the same way a candidates personality does.

In all honesty, voters are searching for affirmation and not information. Presidential elections are quadrennial and for the most part remain out of sight and out of mind otherwise– these reasons create non-voters. For those who vote, they’d like the decision to be an easy one so that they can return to their normal routines. Thus the need for affirmation over information is created.

Here’s a better look at Donald Trump’s debate tactics that have put him at the center of this week’s Republican National Convention.