Everyday millions of us are exposed to designed content distribution plans that have been months in the making. Allow me to elaborate.

Next year Rio De Janeiro (Brazil) will host the summer Olympic games from August 5th to August 21st. In those 16 days, millions of Americans and viewers around the world will be exposed to immaculately detailed content distribution. Official sponsors and supporters such as Coca-Cola, GE, Bridgestone, Visa, Samsung, McDonald’s, and several others will be rolling out expertly crafted content.

That being said, here are a few of the best advertisements from the 2012 Olympic games held in London.

Each brand chose to present the Olympics as an honorable event in which to represent your country and captured the magnitude of the games reach by choosing to focus more on the emotions of love & pride and the journey leading up to the games.

The ad by Procter & Gamble was a powerful reflection of the strength and support provided by mothers in shaping young Olympians and helping them forge a path to their dreams.

How many times have you seen an athlete thank their mother (and father) for the guidance and help which made their dreams possible? Numerous, and P&G was wise to pick up on this fact and avoid the cliche idea that winning is both an isolated event and effort by the hands of the athletes.

Not convinced? Check out this heartfelt speech delivered by Kevin Durant after being voted the NBA’s “Most Valuable Player” in 2014.

Adidas on the other hand, played up the pride of representing a nation– the athletes mother country– on a global stage. The ad plays upon the emotions of nationalism and unity, and the love and support of your fellow countrymen in a situation that is literally, “Us Against The World.”

They were powerful statements for both the multinational corporation and global athletic apparel brand that galvanized millions of viewers.

It’s clear that content is king and that when developing marketing collateral it is of the utmost importance that it is done so with purposeful intent. These powerful, belief-shaping ads would have been far less effective had they been played at 2am in the morning during a water polo match.

The entire aim of their campaign would be missed due to poor planning and purchasing a terrible airing spot. Instead, P&G chose to run their commercial slot during prime time during the most watched Olympic events— soccer, swimming, track & field, gymnastics, and volleyball; in their respective order. *The events that weren’t live were pre-recorded and featured during peak viewing hours.*

Each ad was released strategically during these peak viewing hours for their intended audience. P&G knows every person has a mother, and there’s a good chance whether you’re an Olympian or not, you can relate to the aspects of motherhood. However, the ad probably resonated especially with mothers as the difficulty of their role is often overlooked and primarily reciprocated by their children.

Likewise, Adidas’ ad was instead used to tease the Olympics in the preceding weeks, sparking greater national pride for an event  hosted in viewers home country. It was a call to action to support the athletes with the message that everyone has a position to play, and as a spectator theirs was to cheer on their countrymen carrying the hopes and dreams of a nation.

These ads were concepted months ahead of time and scheduled for a deliberate roll out much the way you should design your content. At TalenAlexander, we utilize the aid of a Content Marketing Matrix when distributing content throughout our blog, social accounts, and legacy media collateral.

So how can you go about building a content matrix?

Let’s examine each a bit more closely to get a better idea of how you can develop content that hits the mark.

1.Creating a Contextual Situation a.k.a Developing a Audience (Buyer) Persona

Start by defining whether your product/services are for B2B, B2C, or B2G clientele. When you’ve identified who you’re marketing to, next you will need to create a list of questions that help you better flush out exactly who comprises this audience.

A middle-aged (25-45) man who is a sports fan and gets his news from online websources, is into Fantasy sporting leagues, and accesses Facebook to keep in touch with family, friends, and colleagues.

While this is a fabricated persona, some of the characteristics might actually fit a Draft Kings audience member.

This first step is crucial in developing your content matrix and will require research. We recommend you actually interview your consumers or reach out to them with surveys or questionnaires to help you build a profile.

This first step is essentially making your audience aware that you exist because face it, everyone is vying for their attention already. If you have a product/service they truly need your chances are much higher in gaining their business, so you’ll need to make sure the content is distributed onto a platform they’re familiar with and most likely to visit regularly.

In the case of a Fantasy Football fan, print ads in a local publication are probably your worst bet while a television spot on ESPN is your best.

The next step in developing your content matrix is to define clear goals for your audience. Do you want them to subscribe to your newsletter or vlog? Maybe download a white paper? Or how about engaging with you through Twitter posts?

Whatever your goal, you need to clearly understand them so that you can communicate them with your audience.Your job is to lead them throughout each stage in order to increase your overall chances for success.

For example, if you’re looking to gain regular subscribers to your YouTube account, you should leave clear instructions for them to do so. The most common phrase attached to YouTube accounts is, “Don’t forget to subscribe.”

In the past we’ve noted that the human attention span is less than that of a goldfish— 9 seconds! In the amount of time it takes for someone to make a final decision after observing your content, you could lose them forever. Maybe not forever, but after digesting your kick ass content you should at least make it known that you have more content available and will steadily be releasing more.

That is the underlying message in the phrase, “Don’t Forget to Subscribe.” There are several others ways in which to ease your audience in conversions especially if you’re not utilizing a video account like YouTube or Vimeo. Dedicated landing pages on your website are a great way to alert visitors of a regularly distributed newsletter and provide them the opportunity to join your email list.

The last step (No. 2) segues into the tactics portion of your content marketing matrix perfectly. By now you’ve developed a buyer persona and clearly defined audience objectives for your content. Now it’s time to research the best manner in which to contact your audience.

This circles back around to the research required when defining your buyer persona. Is your target audience active on social media? Do they visit online forums or communities? Or are they more inclined to traditional radio and television broadcasts when receiving their information? 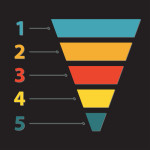 Bear with us a moment and think of your conversions as a funnel. As you lead visitors through this funnel, the number you start with trickles down significantly at each phase. Your goal is to ensure that at each stage you’re taking the necessary measures to ensure you end up with conversions– the average conversion rate is between 2% and 5%.

To maximize your potential in achieving at least the average conversion rate, it is imperative that at this stage you choose the proper medium in which to contact your audience. In using our Draft Kings example, you wouldn’t want to reach out to an audience through email when they primarily use Facebook or Twitter as a news source.

It takes more than just finding your network, as crafting persuasive messaging that resonates with your audience is key. As the saying goes, “The devil’s in the details,” and in content marketing the minutiae is what matters.

And now we get to the fun part. You’ve jumped through all the hoops in defining your buyer, figuring out your conversion goals, and the best outlet in which to reach your audience. Now all that’s left to do is create your content.

We like to start with what we know, and build from there. By choosing subjects we thoroughly understand, we can begin developing content that will be most beneficial to our audience. For subjects in which we have theoretical knowledge, we perform our own research and put it to the test.

This is quite often the standard procedure used by content marketers when developing content (without a matrix). However, there is another important step in developing marketing collateral. We’re all aware of the importance of curated content and the power of repurposing it, but when developing a matrix it is important to perform an audit of your current media.

Look through past posts that may have resonated well with your audience or that may fit all your newly defined marketing criteria. When you’ve finished the process of painstakingly combing through all your material, you can then reintroduce these posts/video/pictures as a starting point or as a place to piggyback off of newly developed content.

After all of this, we realize that content isn’t king, but that properly planned and executed content is king.

Take some time to sit down with your content marketing team and thoroughly develop a strategy that will lead to the types of results you desire, but most importantly remember to have fun and that content marketing success is not overnight. It takes practice, foresight, consistency, and most of all collaboration to create a successful marketing campaign.