On this day in history (1990) the father of the world wide web, Tim Berners Lee, published his proposal for the online information space.

During the world wide web’s inception, Berners-Lee was privy to an idea that would change the world and ultimately required a grassroots campaign among software developers to further advance his research and development into HTTP (Hyper Text Transfer Protocol). Since then the e-commerce industry has risen, membership within online communities has become the norm, and now document storage is no longer tied to a physical location on a server.

Berners-Lee’s hypermedia initiative has been the crux in creating a more globalized world affecting everything from music sharing to telecommunications and now social media. In turn, the world wide web has  revolutionized the marketing industry and the way information is disseminated.

Berners-Lee goes on to explain how the “Linked Data” project he’s constructing will change the way we view raw statistics and will have an impact similar to that of the world wide web on society.

…We are very conscious of the huge challenges that human society has right now — curing cancer, understanding the brain for Alzheimer’s, understanding the economy to make it a little bit more stable, understanding how the world works. The people who are going to solve those — the scientists — they have half-formed ideas in their head, they try to communicate those over the web. But a lot of the state of knowledge of the human race at the moment is on databases, often sitting in their computers, and actually, currently not shared.

In realizing that information, or rather data, necessary to impact humanity was not freely accessible is the inspiration behind linked data. Much the same way information was inaccessible prior to the web, data is subject to the same limitations.

Berners-Lee goes on to emphasize that the linked data project would serve more than just the interests of scientists and engineers, affecting our lives just as much as the people set to utilize this date in curing diseases and advancing technology.

We want unadulterated data…It’s important because you have no idea the number of excuses people come up with to hang onto their data and not give it to you, even though you’ve paid for it as a taxpayer. And it’s not just America. It’s all over the world. And it’s not just governments, of course — it’s enterprises as well…data is about our lives. 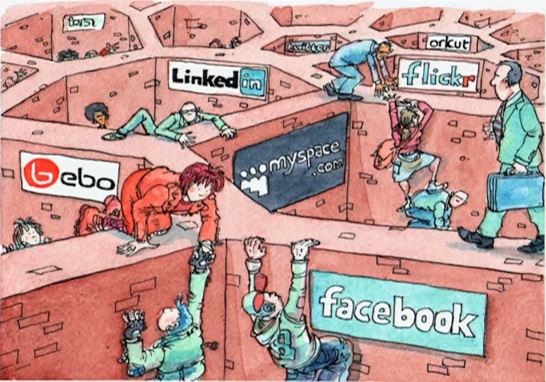 “The way to break down the silos is to get inter-operability between social networking sites. We need to do that with linked data.”

Recently, Berners-Lee was among a number of critics taking issue with regulations the European Union is set to place upon Net Neutrality and on October 27th, the EU signed an agreement that will place regulations on April 30th, 2016. Berners-Lee released a statement in defense of start-ups and the e-commerce industry saying,

These rules will threaten innovation, free speech and privacy, and compromise Europe’s ability to lead in the digital economy.

Streaming services like Netflix and Amazon Prime accessed by consumers would be under regulation according to the internet service provider they choose. However, readers in the U.S. can rejoice because in February of this year (2015), the Obama Administration and FCC entered into an agreement protecting a free and open internet. Nonetheless, their decision was not met without backlash in what seems like a small victory in a much larger war.

Only big companies can deal with vast, sweeping regulation like the 313 pages imposed by the FCC. This administration has had a habit of identifying a particular problem and then convincing the voters that we require enormous new swaths of government control to fix it. – Carly Fiorina

As the future of a free, open web and linked data are currently up for grabs, grassroots campaigns have sor managed to stave off any changes sought to amend net neutrality by ISP’s and the FCC. It is a conversation we’re sure will be revisited again in the future and one which we recommend paying close attention.

At TalenAlexander we salute Sir Tim Berners-Lee for his pioneering work and look forward to the impact his linked data project will further affect the marketing industry and they ways in which we create and connect with target demographics.

What are your thoughts concerning the future of net neutrality? Are you for or against the current agreement the Presidential Administration and FCC have entered into? We’d love to hear your thoughts. Let us know in the comment section and continue the conversation over on social media with your friends, family, and coworkers.