Apollo 7 and Our Future In the Stars

Happy Throwback Thursday, and in keeping with our Back To The Future theme, we’d like to congratulate the ‘Cubbies’ on a great run… *last night their World Series run ended after an 8-3 loss to the 2015 National League Champion New York Mets*

On this day in history (1968) the Apollo 7 crew successfully completed an 11 day orbit of the Earth. Splashing down in the Atlantic Ocean, the crew contributing significantly to the legacy of U.S. space exploration making the writing of notable science fiction authors like Robert Heinlein a reality. 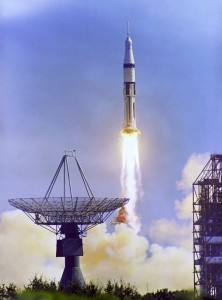 Pioneering space exploration marks an intersection of art and science influencing one another and furthering the legacy of humankind. In an article by Scientific American, author Ben Bova is cited as revealing to SPACE.com in an email,

The very idea of orbiting artificial satellites and sending astronauts to the moon was science fiction when I first started my career… Science fiction helps to inspire young readers, who then go and make science fiction become actual fact. Science fiction stories, and films such as George Pal’s ‘Destination Moon’ helped to convince the taxpaying public that space flight was not only possible, but desirable from both a political and economic point of view.

The 2014 hard science-fiction film Interstellar inspired a wave of academic papers on astrophysics and black holes. *The foresight of director-writer brothers Christopher and Jonathan Nolan to bring aboard VFX company, Double Negative, resulted in (theoretically) accurate depictions of a ripple in time.

Scientists inspired by hard science fiction novels by and authors inspired by scientific developments will continue to help shape and change the reality we live in. At TalenAlexander, we admire and aspire to maximize human potential and therefore salute the bravery  of NASA and the Apollo 7 crew.